Sandbags, sand, polyethylene sheeting and tools to fill and tamp sandbags are good to have on hand in case of emergency.

They enable you to adapt to change by constructing a flood barrier, erecting some ballistic cover, a windbreak or even build an expedient fallout shelter. Sometimes sandbags even get used to provide ballistic protection to vehicles or to provide traction to rear-wheel drive vehicles in foul weather. If the vehicle gets stuck, sandbags can be removed and placed on the road surface to provide traction.

Because sandbags are inexpensive and don’t take up much room empty, so they are easy to cache onsite at a bugout location or recreational property. If you end up living in a tent for a while, a windbreak constructed of sandbags can keep blown snow from building up and caving it in.

Projects constructed with sandbags are generally for short term use because modern sandbags are made of polypropylene and sunlight causes them to start falling apart within a couple of years. However, for projects where a more durable, longer-life building material is needed, mix ten parts sand or soil with one-part cement. If burlap sandbags are used, the cement/sand mixture can be mixed and placed dry and them sprinkled lighted with water. Sandbag structures can also be painted with cement slurry to protect them against UV light, rot and abrasion.

Another option is to sheathe sandbag construction to reinforce it and protect it from direct sunlight and abrasion which eventually compromise sandbags, allowing sand to spill out. Concrete-impregnated fabrics are another option that enables a rapidly constructed flood barrier, fighting position or shelter to be reinforced very quickly. The concrete-impregnated fabric is wetted and then dries solid, containing the sandbags and enabling them to withstand considerable punishment.

When the pioneers arrived out West, the first permanent shelters they built were often dugouts. Concrete sandbags can be used like masonry to construct a solid dugout shelter that makes use of passive solar design features to keep itself warm in winter and cool in summer, in much the same way that earthbag homes are constructed. Most of the building material can typically be gathered from the building site or nearby, cutting both cost and environmental impact. And the structure stops bullets, so that’s a plus!

Most of my sandbag and flood prevention training has come from FEMA though the CERT program, so that’s where this is coming from if you’d like to follow up or receive hands-on training. Filling sandbags is an operation best carried out by two or three people. While filling sandbags is a straightforward process, large numbers of are typically needed, so the process must proceed both quickly and efficiently.

The equipment required to construct a barrier is sand, sandbags, a shovel, poly sheeting and any PPE (Personal Protective Equipment) worn, such as work gloves, work boots, eye protection and hard hats. If you have a tamping bar, it can help tamp sandbags in place. If you have access to a couple of pickups, ladder, a knife and some old traffic cones, you can construct funnels, which can speed the process considerably.

Lay the ladder horizontally, supported by the tailgates of the two trucks. Cut off the traffic cones about halfway up, turn them upside down and place them in the ladder to create a row of supported funnels. An improvised sandbag filler will make sure that the sand goes in the bags instead of on the ground. Many counties and cities have automated sandbag filling machines, bag holding racks and large funnels that mount on the backs of vehicles that speed the process greatly and save labor, but these are a luxury that they typical survivalist is unlikely to have.

Ideally, the fill for sandbags should be clean, washed sand. If good sand is unavailable, gravel or soil can be used in a pinch, but they will diminish effectiveness somewhat.

To fill sandbags, one person should hold the sandbag open on the ground, while a second individual deposit sand into the sandbag. Where most sandbagging efforts go wrong is that they overfill sandbags. For sandbags to create an effective barrier, they must be between ½ and 2/3 full. If they are filled beyond 2/3’s, they will compromise the integrity of the barrier. A third party stacks the filled sandbags.

The sandbags do not need to be tied, in fact, they’ll form a tighter seal when stacked in a barrier if they are not. Nevertheless, they can be tied if the sandbags are going to be transported or stored for some reason. 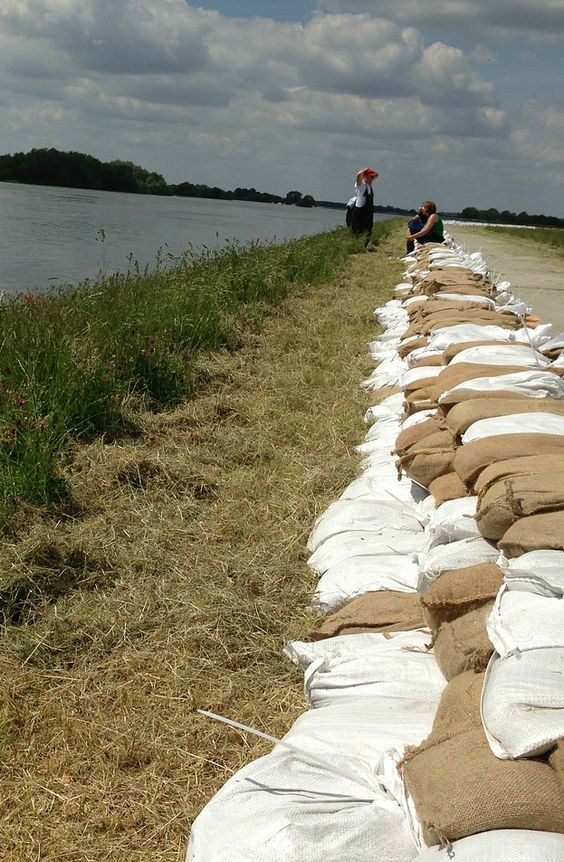 Arrange the people in the passing line so that they are staggered and facing each other to reduce physical exertion. To form a passing line, have your team form a line, then count down the line, “One, two, one, two …” until your reach the end. Have the “one’s” take a step back and then have the “two’s” turn and face the “one’s.” Your staggered passing line is formed.

The pyramidal structure of the resulting flood barrier can contain fast-moving water and water carrying debris. A sandbag/poly barrier will not keep 100% of the water out, but leakage is often manageable with some pumping.

Sandbags should not be placed on top of manhole covers. Instead, ring manhole covers with sandbags and allow the water to seek its own height. 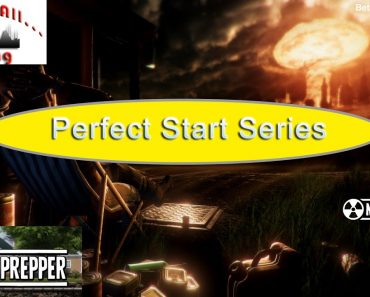